The Federal Reserve held its annual Jackson Hole meeting on August 27th. Fed Chairman Jerome Powell’s speech made the case for the Fed to start reducing its monthly bond purchases, which were started during the pandemic to keep interest rates steady, increase bond market liquidity, and keep credit flowing. He said the Fed has made progress toward its goals of average inflation running above 2% and maximum employment in the U.S. labor market. While Powell laid the groundwork to start tapering (i.e., reducing) the Fed’s monthly bond purchases, he went to great lengths to make clear tapering is a separate decision from raising interest rates. He warned that raising interest rates to tame inflation pressures could disrupt the recovery and said the Covid-19 delta variant poses a risk to the economy.

Financial markets were anxious leading up to the Jackson Hole meeting. The last time the Fed reduced bond purchases in 2013, investors threw what came to be called a ‘taper tantrum’ out of fear the Fed would remove support too soon and stall the recovery. This time around, Chairman Powell’s speech appears to have settled investors’ jitters. His tightrope act provided advance notice of the Fed’s intent to reduce monthly bond purchases, which markets already believe is providing limited benefit, but reassured investors interest rates will remain low to support the recovery.

Recent economic data indicates the Covid-19 recovery is moderating. The incoming data paints a picture of an economy reverting back toward pre-pandemic trends amid supply chain disruptions and labor shortages. Regional manufacturing surveys from Federal Reserve bank branches in Dallas, Kansas City, New York, Philadelphia, and Richmond missed the market’s estimates during August. The U.S. Census Bureau reported July retail sales declined from June, while the National Association of Realtors announced July housing starts declined -7% compared to June. While the data is cooling, it does not point to an imminent economic slowdown. Even after declining from June levels, retail sales and housing starts both remain well-above pre-pandemic levels. The recovery will continue to be bumpy and the data will be lumpy, but the economy is forecasted to keep making positive progress in the months ahead. 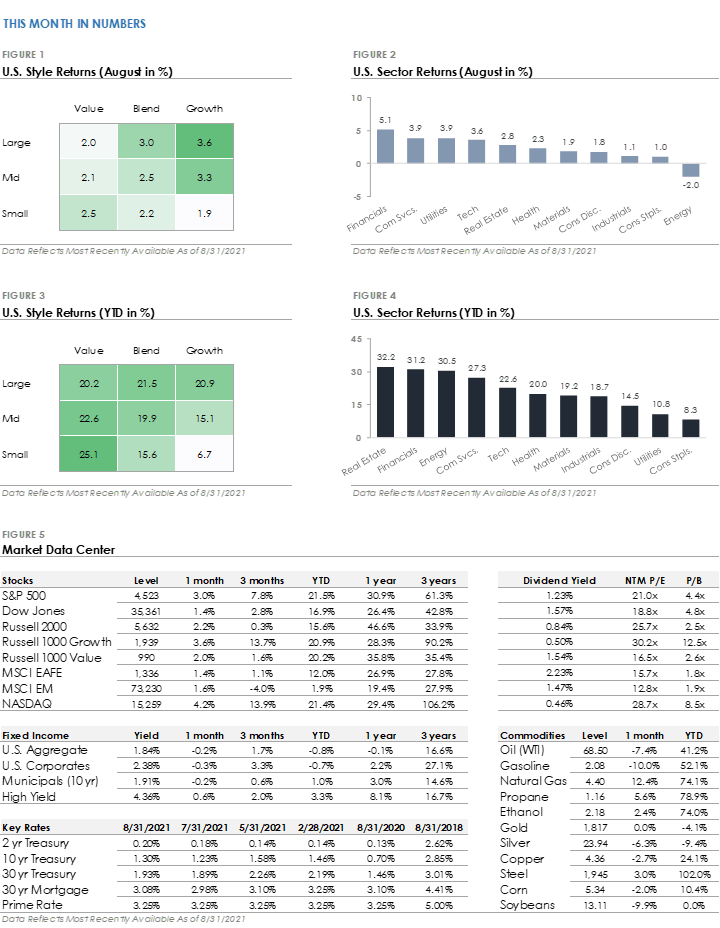