Covid cases are declining as the delta variant fades, but the pandemic is leaving lasting economic effects. Supply chains are strained as strong demand overwhelms reduced production capacity and stressed shipping networks. Inflation remains stubbornly high, resulting in price increases across food, clothing, appliances, and other everyday items. In commodity markets, the price of WTI oil rose +10.9% during October as demand increased and oil production lagged behind. The Commerce Department’s preliminary GDP estimate indicates the economy expanded at a +2% annualized pace during the third quarter. It was a slowdown from the +6.3% and +6.7% recorded during the first and second quarters, respectively, earlier this year.

The current economic environment is fueling a stagflation debate. Stagflation is defined as a period of high inflation, high unemployment, and slow economic growth. The term originated in the 1970s but was rarely used over the past decades. Stagflation talk increased in recent months as the above-mentioned supply chain issues, rising energy prices, and inflation pressures led to concerns about slower economic growth. Slower third quarter GDP growth merits a closer look at the data.

Looking at the Data ― Is Stagflation a Real Concern?

Fortunately, the U.S. economy has not experienced many stagflation periods. While historical precedent is limited, current economic data has not deteriorated to a level consistent with stagflation. The third quarter rate of GDP growth slowed but remained positive. The Federal Reserve recently upgraded its 2022 and 2023 GDP growth estimates, indicating it views the current economic environment as temporary. Consumer price inflation rose +5.4% year-over-year during September, but recent month-over-month trends show inflation is below the high levels experienced earlier this year. Labor market data suggests the 4.8% unemployment rate is related to lower labor force participation and voluntary quits rather than layoffs. The question is how quickly the economy can get back to normal. In our view, supply chain, inflation, and labor market pressures will ease over the next 12 months and the market’s stagflation fears are overblown. 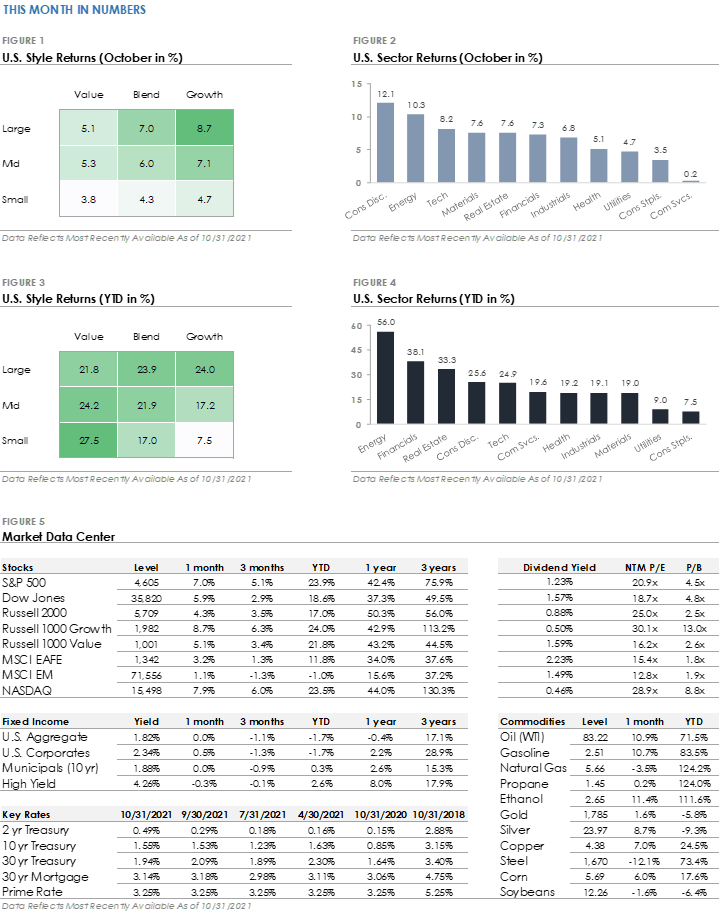