We are just past the halfway point and 2020 has provided plenty of fireworks! This year has already brought the worst pandemic to hit the U.S. in over 100 years, a government-induced recession from a country-wide lock down, some stomach-churning market volatility, and unprecedented stimulus from policymakers totaling several trillion dollars—that’s trillion with a “T”.

The dizzying volatility began in late February with the fastest-ever bear market decline (since the inception of the Dow in 1896).  It took only 19 trading days for the Dow to close more than 20% below its record high and the S&P 500 Index (“SPY”) fell -20% during the first quarter for one of its worst starts to a year, ever.

After the March 23 market low, the record breaking continued as the SPY staged its best 50-day rally since the inception of the index more than 60 years ago.  The strong snap back led to a +20% Q2 gain to finish out the first half of the year only down single digits.

Much like dropping a 20-dollar bill and picking it up, this doesn’t mean you are 20 dollars wealthier. Down -20% (Q1) and then up +20% (Q2) comes out to a -4% drop for the first half of the year. The tug-o-war between record stimulus and the impact of COVID-19 continue to play out as we have seen a near “V” shaped recovery thus far. 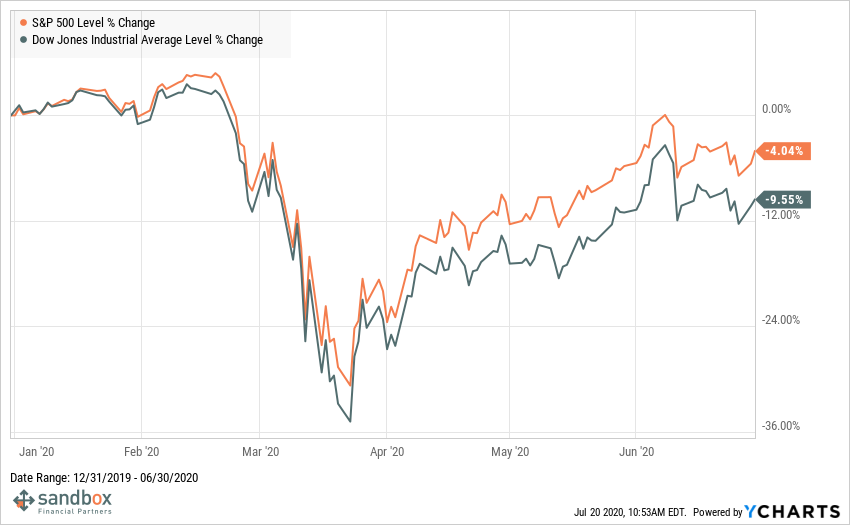 One of the most confusing but useful lessons that investors learn over time is that Main Street (the economy) and Wall Street (the stock market) are not always synchronized.  We have commented on this during client calls and in past blog posts. There are times when Main Street looks optimistic and stocks drop and times when Main Street looks pessimistic, but stocks rise.  Q2 2020 was a great example of the latter. The reason for the discrepancy is that Wall Street and Main Street reflect two different perspectives: stocks look forward, while the economy looks backward. In our view, during periods of transition and volatility, like the last four months, the two will often be out of sync for a period of time.

This chart shows the stock markets over the last 30 years. the S&P 500 (orange) and Dow Jones Industrial Average (green) overlaying  U.S. economic recessions (grey columns). Despite this being the third recession in the last 30 years, the markets have continued to move higher as companies and businesses have found ways to innovate and grow. 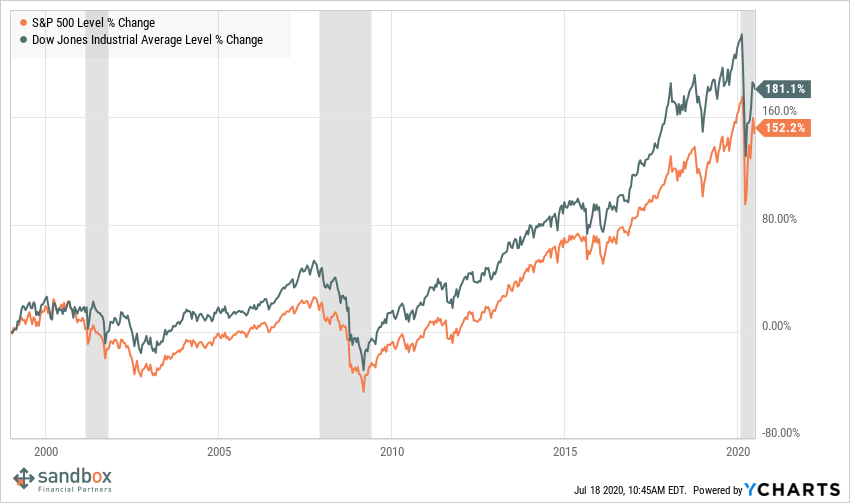 Going forward, we believe that human ingenuity will beat COVID-19 and policymakers will be able to re-start their stalled economies on the heels of unprecedented levels of stimulus. However, it is important to acknowledge that visibility is unusually low  to the length and magnitude of the current economic downturn, as there is no historical “playbook” for navigating this crisis. A second wave of infections that leads to further lock downs could change our outlook and there will be plenty of bumps along the way.  We expect volatility to rise as we get closer to the election and will provide more commentary as we get closer.

If you have questions on your finances, investments or planning, please contact us for a personalized review. Stay safe and healthy!